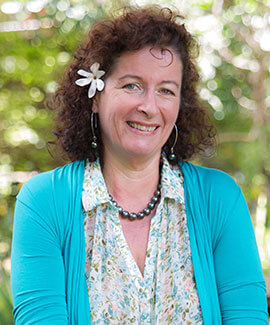 Lydia was born in Chester, England, and has lived and worked in many areas of the United Kingdom. Graduating from University College London with a BS in geology, she then changed directions and pursued a career in sales within the hospitality industry. Whilst traveling during a year’s sabbatical, she arrived in French Polynesia in November 1993 and decided to stay. Now married to a Tahitian, she has continued working for the hospitality industry in various sectors: as an inbound group coordinator, in guest relations for an international hotel chain and local travel agencies, and as an island guide.

I left the UK in 1993 to tour the world, for 4 months I travelled the North American continent via Miami, Chicago, Vancouver and LA on a motorbike, after which I left for Tahiti and decided to stop!